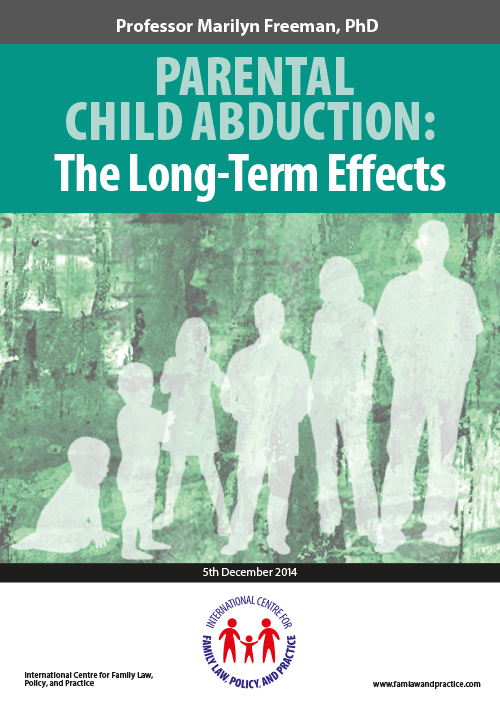 Research is a key activity of the Centre

Professor Freeman’s research on the long-term effects of parental child abduction was published in December 2014, with a launch event at the Inner Temple in association with 4 Paper Buildings, The Legal 500 Family and Children Set of the Year, 2019, where Professor Freeman in an Academic Tenant. She is also Principal Research Fellow at the University of Westminster, where the Centre’s Research Hub is now located.

Professor Freeman, together with Associate Professor Nicola Taylor, The University of Otago, New Zealand, worked on a project funded by The University of Westminster: Using Research to Improve Outcomes for Abducted Children which culminated in an Experts’ Meeting on Issues of Domestic/Family Violence and the 1980 Hague Child Abduction Convention which was held in association with The Permanent Bureau of The Hague Conference on Private International Law on 12 June 2017 at The University of Westminster. Participating experts included judges, government officials, Central Authority officials under the 1980 Convention, lawyers, mediators, psychologists, academics, researchers and members of 19 jurisdictions: Australia, Belgium, Brazil, Canada, Finland, France, Germany, India, Italy, Japan, New Zealand, Norway, South Africa, Switzerland, the Netherlands, the United Kingdom (England and Wales, Northern Ireland, Scotland) and the United States of America, as well as European Union officials and members of the Permanent Bureau of the HCCH. A report from the meeting appears on the website of the Hague Conference on Private International Law and formed Information Document No. 6 for the 7th Special Commission on the Practical Operation of the 1980 Hague Child Abduction Convention and the 1996 Hague Child Protection Convention – October 2017.

Professor Freeman has recently completed, together with Associate Professor Nicola Taylor, their British Academy funded research project into the Outcomes for Objecting children under the 1980 Hague Child Abduction Convention. They held three global Workshops for invited international delegates on the Role of Children in 1980 Hague Child Abduction Convention Proceedings as part of the project’s dissemination events: University of Auckland 8-9 February 2018; University of Genoa 8-9 March 2018, University of Westminster, London 22-23 March 2018. The London event began with a lecture by Baroness Hale on ‘Child Abduction from The Child’s Point of View”.

They are now working together with The Hague Conference on Private International Law to take forward the issues highlighted in the research project.

Professor Freeman led a team at Westminster Law School in a public engagement project funded by The Quintin Hogg Trust concerning The Voices of Children and Young People in Decisions Affecting Their Lives. A policy briefing was widely disseminated in November 2018, and is available here.

Her prior work in this field may be found on the website of the international child abduction charity, reunite, www.reunite.org:

Dr Frances Burton will shortly publish her research into Cohabitation Law Reform in English Law. Her paper setting out the results of this comparative research was delivered in the July 2016 conference programme on the morning of Wednesday 6 July and as two guest lectures at Winchester University on 14 October 2016 and and 2 November 2017.

Her current research project is on Access to Justice. She has also been writing in Hart’s major publication ‘Women’s Legal Landmarks’, published for the centenaries of women’s suffrage and the opening of the Bar and Law Society to women, in which our Patron, Baroness Hale, also contributed a chapter on the landmark of her 1984 seminal work with Susan Atkins, ‘Women and the Law’ (which has been republished by the Institute of Advanced Legal Studies as an open access edition in 2018).